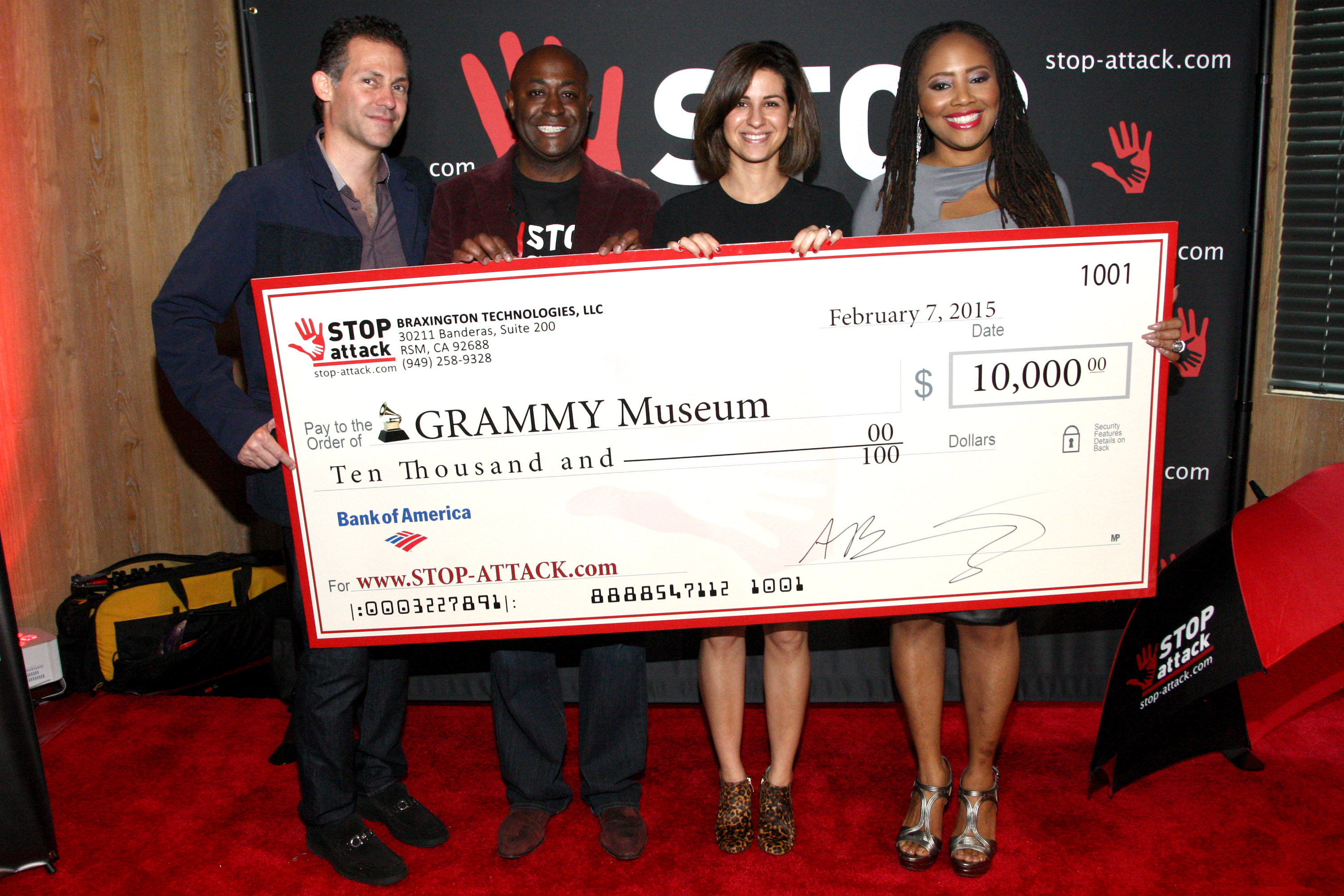 Innovative Anti-Assault App GRAMMY Gifting Suite News. The STOP-ATTACK App Gains Support from GRAMMY winner Lalah Hathaway & nominees Ledisi and Antonique Smith Amongst Other Notables –  The groundbreaking mobile application STOP_ATTACK was a contributing sponsor at The GBK GRAMMY’s Celebrity Gift Lounge on February 7, 2015. STOP-ATTACK CEO Anthony Bright gained support from the GRAMMY Best Traditional R&B Song winners Robert Glasper (Robert Glasper Experience) and Lelah Hathaway who believes STOP-ATTACK is “such an amazing app…to have…that can alert all your closest people,” and “the smartest thing ever.” Both stars vowed to “definitely download …STOP-ATTACK, [and] hope you do too.”

STOP-ATTACK sought to further illustrate its concern for user welfare by providing official STOP-ATTACK umbrellas to each celebrity talent for the rainy evening. The team also provided customized T-Shirts, tank tops and a convenient sling backpack that everyone, including Torrei and Kevin Hart’s children simply adored.

Mr. Bright and the STOP-ATTACK organization also shared in the GRAMMY’s optimism to bringing music to youth everywhere, and with the help of Lalah Hathaway presented the GRAMMY Museum with a ten thousand dollar donation to support educational programs to inspire the next generation. The Museum is an interactive, educational museum devoted to the history and winners of the Grammy Awards…that strives to inspire its visitors to learn about musical genres and history through interactive touch-screens, videos, and recording booths.

The STOP-ATTACK assault-response app comes packed with potentially life-saving features and can be activated using hot-keys or by touching the app’s icon. Upon activation the app is placed in a stand-by mode and with one touch of your screen your device begins a video and audio recording session.

The application goes beyond being able to record physical and verbal abuse, and Tichina Arnold agrees that STOP-ATTACK’s options for a flashlight and alarm are “definitely a deterrent” to assailants possibly preventing them from taking any further action, and is going to “totally put that [on her daughter’s phone].”

Along with providing evidence to bring perpetrators to justice and spreading the word on threats walking among us, STOP-ATTACK offers options to dial emergency services and a user-designated Panic List of contacts who can be notified of an attack at the user’s discretion as well as be allowed to view attacker footage.

User privacy is not compromised with STOP-ATTACK. All recordings are stored to a secure and private cloud and are only visible to the user and their customized set of contacts. Users also hold the sole ability to download and manage or delete recordings, holding true to STOP-ATTACK’s mission to give their members control of every situation.

STOP-ATTACK is suitable for people of all ages because, as Arlen Escarpeta star of the Whitney Houston of the made for television Lifetime film says, “it’s smart, it’s innovative, it’s easy,” and is perfect for parents hoping to gain peace of mind for their children or an adult walking in a parking garage late at night.

Mr. Bright has a bachelor’s degree in Computer Science and a minor in Business Administration from Upsala College. He is a member of the International Bullying Prevention Association and a Harlem Black Achievers Award Recipient.

STOP-ATTACK is available on IOS and Android mobile devices and costs only a low $1.99 a year. For more information on STOP-ATTACK and to see videos of the app in real-life scenarios please visit http://www.stop-attack.com/.